To celebrate, I thought I’d post some measurements. They are the results of a speed test I’ve been running on RelStorage. I created the speed test for the purpose of identifying performance problems. The test certainly helped, but I found that the results varied dramatically between runs, so don’t take these too seriously.

The first test shows the time spent per transaction to write 100 objects, followed by the average time spent to read those 100 objects in a different transaction. The time shown is the best of 3 runs, where each run measures the mean duration of each of 10 transactions. 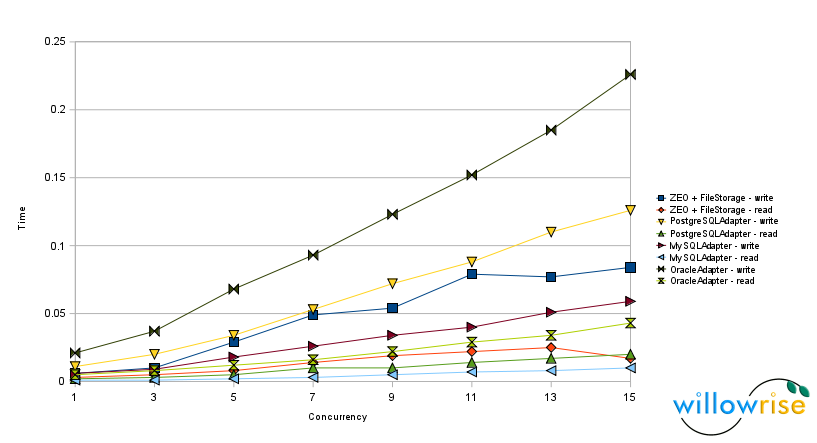 The second test shows the time spent per transaction to write and read 10,000 objects.

In this case, MySQL still leads in read speed, but both ZEO and PostgreSQL beat MySQL in write speed. Surprisingly, the ZEO read speed turns out to be the slowest of all the tests, perhaps because 10,000 objects do not fit in the ZEO cache.

The ZEO measurements have major aberrations on the right side of the chart. This may be caused by the fact that during these tests, the ZEO client segfaults on nearly every test run. Fortunately, the fault is in the client, not the server, and these tests put unusually high stress on the ZEO connection setup and teardown code. ZEO connection setup and teardown usually only occurs when Zope starts or stops.

While the primary goal for RelStorage is reliability, not performance, it’s nice to see test results that suggest RelStorage can compete and often win.

2 thoughts on “RelStorage 1.0 and Measurements”