For those just tuning in: RelStorage is an adapter for ZODB (the database behind Zope) that stores data in a relational database such as MySQL, PostgreSQL, or Oracle.  It has advantages over FileStorage and ZEO, the default storage methods.  Read more in the ZODB wiki.

Download this release from PyPI.  As I mentioned in another post, this release works around MySQL performance bugs to make it possible to pack large databases in a reasonable amount of time.

If you are upgrading from previous versions, a simple schema migration is required.  See the migration instructions.

The performance charts have changed since RelStorage 1.0. 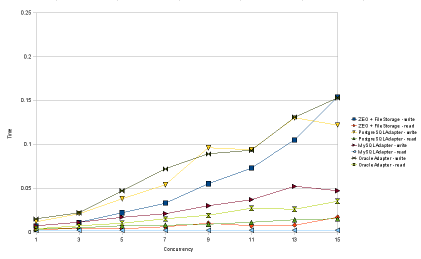 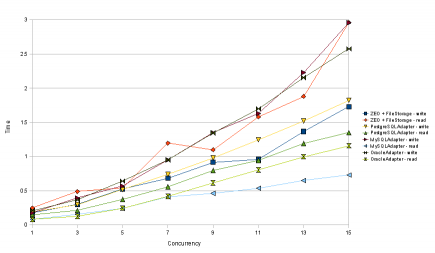 The bad news that I haven’t resolved:

Of the three databases RelStorage supports, MySQL tends to be both the fastest and the slowest.  MySQL is fast when RelStorage executes simple statements that the optimizer can hardly get wrong, but MySQL is glacial when its query optimizer makes a bad choice.  PostgreSQL performance seems more predictable.  PostgreSQL’s optimizer seems to handle a subquery just as well as a table join, and sometimes SQL syntax rules make it hard to avoid a subquery.  So, to support MySQL, I have to convert moderately complex statements into a series of statements that force the database to make reasonable decisions.  MySQL is smart, but absent-minded.

The ZEO tests no longer segfault in ZODB 3.8.1, which is very good news.  However, ZEO still appears to be the slowest at reading a lot of objects at once.  While it would be easy to blame the global interpreter lock, the second chart doesn’t agree with that assumption, since it shows that ZEO reads are slow regardless of concurrency level.  ZEO clients write to a cache after every read and perhaps that is causing the overhead.

I will recommend that all users of RelStorage upgrade to this version.  The packing improvements alone make it worth the effort.

I’m writing RelStorage, a new storage implementation for ZODB / Zope / Plone. RelStorage replaces PGStorage. I’ve put up a RelStorage Wiki page and the zodb-dev mailing list has been discussing it. There is no stable release yet, but a stable release is planned for this month.

While performance is not the main goal (reliability and scalability are more important), I was pleasantly surprised to discover last week that creating a Plone 3 site in RelStorage on PostgreSQL 8.1 is a bit faster than doing the same thing in FileStorage, the default ZODB storage. Clearly, the PostgreSQL team is doing a great job!

Several years ago I put together an early prototype of PGStorage. I recall discovering that PostgreSQL was terribly slow at storing a lot of BLOBs. I read about the soon-to-come TOAST feature, but I wasn’t sure it would solve the problem, so I discarded the whole idea for years. Today, PostgreSQL seems to have no problem at all with this kind of work. It sure has come a long way.

RelStorage also connects to Oracle 10g. According to benchmarks, Oracle has a slight performance advantage, perhaps due to the “read only” isolation mode that Oracle provides. It might be useful for PostgreSQL to get that feature too.

I’m considering setting up a MySQL adapter for RelStorage as well. When the database is in MySQL and Zope is running in mod_wsgi, we could say that the “P” in LAMP stands for Plone!